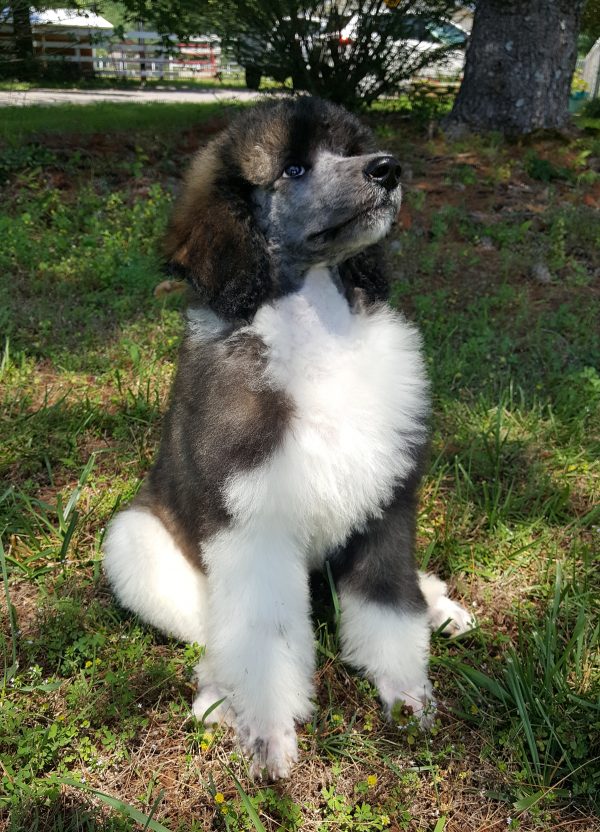 What to consider before bringing your poodle home

We believe that standard poodles are loving members of the family. They are excellent companions who are devoted to their people.

Poodles have a range of personality traits with varying levels of play drive, retrieve drive, prey drive, and, of course, couch-potato-ness. Most poodles love to play. Average, well-socialized poodles love to go everywhere with their family. The hallmarks of the standard poodle personality are well-rounded athleticism, intelligence, and a will-try-anything attitude that makes for a can-go-anywhere kind of dog.

Standard poodles don't shed, are good with with children, and generally interact well with other pets. Just like people, each is unique and comes in a wide range of colors and patterns. Whether it's one of many solid colors, spotted or parti, a brindle, tuxedo, sable, or a phantom pattern, there's a standard poodle for everyone.

Poodles need quality time with people and other animals, physical exercise and mental stimulation, quality food, medical care and grooming. Poodles are not outdoor dogs to be left tied up, away from people. Due to their high intelligence and athletic abilities they need something to do, someone to play with, and someone to guide them. If you have any questions about how best to care for your new family member, just ask. We're happy to help!

Heart Song Standard Poodles is located just outside of Huntsville, Alabama on 4 acres where the poodles can watch our horses, bark without fear of bothering the neighbors and enjoy the natural outdoors.  We are 1 and 1/2 hours to Nashville or Chattanooga and 3 and 1/2 hours to Atlanta, Georgia.

All Heart Song Standard Poodle puppies are AKC registered and come from health tested parents. We strive to improve the breed with each puppy we bring into the world. We focus on temperament, health, diversity, and the breed standard. We carefully select our mothers and fathers, producing happier, healthier dogs in a range of colors. As advances in genetics improve our understanding of health issues, we continually adapt and modify our breeding program to take advantage of the latest science.  As professional breeders we breed red, apricot, black, creme, white, brown, parti, phantom, sable, solid colored and brindle standard poodles.

We Loved Them First

This is not written by us but it's how we do things.

Dear Past And Future Puppy Owners,

I loved them first. I thought of you years before you even realized. I planned for and cared about your baby long before you started thinking of adding to your family. I worried about your future with that puppy before you knew there would be one.

There were hours upon hours spent researching lines for the parents of your puppies. Going over breeder after breeder, choosing not only my pet but looking for a dog that will make you your pet. Worrying if you'd be happy, if I had chosen correctly and your puppy would grow up healthy and happy. Going over puppy after puppy with fellow breeders, running over my program with as many knowledgeable breeders as I can, determined to not miss anything. Tracing lines back as far as I could, learning the ins and outs not only for my knowledge but so that I was informed, prepared to go over every detail with you, to answer the questions that sometimes you don't even ask.

Then there's years of watching your puppies parents grow. Loving them and enjoying them as part of my family. Taking them every where I can, training them, socializing them, watching how they fill out. Asking myself I had made the right choice in both of them. Scrutinizing their conformation, how they move, and their temperament. There was the stress of health testing. Praying not only that my babies were healthy but that they had the genes to make your baby healthy.

Finally came the time to put your puppies parents together. For the next 63 days I worried, I obsessed, I grew excited. I watched your puppies mom like a hawk. Making sure my baby was ok, monitoring her diet better than I do my own. Concerned that she was getting enough of the right nutrients and that your growing baby was getting the best start possible. I spent hours on the couch, floor, and dog bed with her watching her tummy grow and anxiously waiting. As your baby and mine grew I laid my hands on her tummy and felt the first movements of your puppy. As the time grew close I spent most nights in the nursery with her. Making sure she didn't go into labor without me knowing, in case something went wrong and one of our babies needed help. When labor started my whole life stopped. I spent every second with her. Your baby was born into my hands and I held my breath as I cleaned them up, watching for movement and breathing, cleaning them up, checking them over, and wondering if you'd love them as much as I already did. I helped your babies brother when mom got tired and he was stuck. I cried when your babies sister didn't make it.

For the first 8 weeks most of my life was filled with your baby. Watching them grow and making sure I was doing everything possible to make sure they started their lives the right way. Making sure each one was getting enough to eat, enough socialization time, that they were de-wormed and given their shots. I was the first person they saw when they opened their eyes. I spent my weeks playing with them and keeping them safe.

I searched for you and interviewed you. As you spoke I tried to read your character. Would you love them as much as I do? Would you bring them in as part of your family? Would you care for this tiny life that I brought into this world that I am responsible for? Some of you were turned away but some of you were welcomed into our family. The day you took your baby home was harder than I'd ever let on. I was excited for you but I was also terrified. Had I chosen correctly? Were you who you seemed to be?

My love and worry didn't end there. I thought about your baby regularly, saddened when I didn't get updates, ecstatic when I did. I hoped you were caring for your baby the way I care for mine. I answered your questions happily and answered them again just as happily to your babies siblings new parents. When your puppies sister ate a couch I stayed up that night she was at the vets, waiting to hear that she was ok. When their brothers parents decided he no longer fit in their life I welcomed him home, sorry that I had chosen wrong for him and promised him it wouldn't happen again.

I loved your baby first and I will never stop.

The English word "poodle" comes from the German pudel or pudelin, meaning "to splash in the water." The standard poodle is believed to have originated in Germany, where it is known as the Pudel or Canis familiaris aquatius. The poodle is also regarded as the national dog of France, where it was once commonly used as a retriever. Many poodles love water starting from a young age. Poodle puppies often play in their water bowls. Poodles also drink from the hose and frolic in the rain. On the opposite end of the spectrum is the poodle who doesn't want to get their feet wet, walks on the sidewalk, and refuses to go out in the rain. This poodle stands in the doorway, sniffs the rain in the air, and looks at you to say, "Do we really need to go out today?"

The American Kennel Club (AKC) registers solid colored poodles, parti poodles, phantoms, brindles, and sables. While many colors can be registered with the AKC, only the solid colors may be shown in AKC conformation. AKC does allow both multi-colored and solid-colored poodles to participate in all other events including obedience, agility, rally, and more. Poodles are classified in the non-sporting group in the AKC.

The United Kennel Club (UKC) is a registry that is in both the United States and Europe. UKC allows both solid colored poodles and multi-colored poodles to be shown in conformation. They allow all poodles to compete in all events. Poodles in the UKC registry are classified in the gun dog group.

Dogs that are advertised as merle poodles are not full blooded poodles. The poodle breed has no gene for the merle color. Dogs that are merle colored must have been mixed with another breed, even if it was many generations back. Be careful when anyone claims to have merle poodles. Unfortunately, unsuspecting buyers may purchase a merle puppy thinking it is a purebred poodle. They often pay a premium price because it is advertised as a rare color.

All of the Heart Song Standard Poodles are AKC registered. Our multi-colored poodles are shown in the United Kennel Club (UKC) shows and are dual-registered.

Everything poodles, articles and tips on how to care for your poodle. Read our
latest news 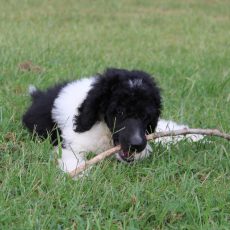 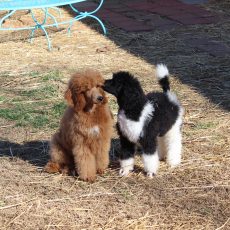 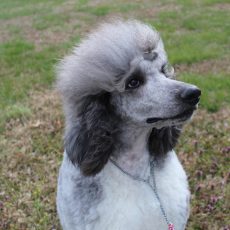 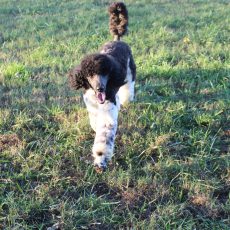 To People with Friendly Dogs 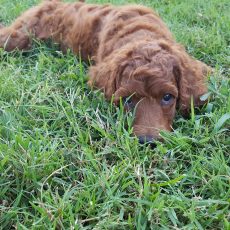 Your new puppy and veterinarian visits, thing to remember. 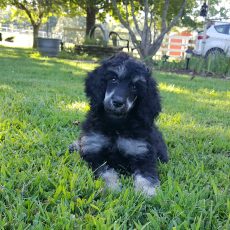 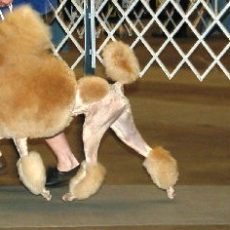 Conformation – What to look for in a standard poodle.

Dogs are not our whole life, but they make our life whole. Author unknown